Never Have I Ever...

... been sobbing all over myself watching a newscast or Youtube video about a family suffering a devastating hardship but powering through in a really inspiring way, then turned around and got super annoyed when my great, healthy kid asks me to get some juice or a give him a hug because he is interrupting my moment.

Cinderella is real, dammit! And she lives in New Hampshire!

So at dinner tonight, Bink looked a little worried.

"Mom. We need to get to the bottom of this. Is there a monster stealing my juice?"

Second, this girl is serious. She is not messing around so obviously I cannot mess around, either. I look at her very solemnly and tell her that I have a VERY big secret. Intrigued, she leans in, and I say in a low voice, ducking around the pasta that Baby Boy is throwing at us...

"I think you are old enough to handle this. Monsters. Are. Not. Real. They're not real! They come from the imaginations of people who write books and stories and they are never real. So there is nothing to worry about!"

Relieved, Bink thinks about this and says:

Hmm... I wasn't sure if I should tell her that these were just people dressed up, because where does that leave Minnie and Mickey? And what about the princesses? Will I ruin her sense of wonder and whimsy before she starts kindergarten?! Am I overthinking this? Of course I am!

She is satisfied with this, but keeps going.

"Oh, no, Mommy! I know Cinderella... I met her last year. She lives in New Hampshire!" Bink says triumphantly, and goes back to eating her waffle.

Last summer, we went to Storyland and Bink met her new best friend, Cinderella. As you can see, it was huge.

"Mommy, I'm eating. Why don't we discuss this later?"

I can't figure out who's smarter, but have a definite feeling that she's already lapped me...

And It's Only Tuesday?!

While Bink was at ballet this afternoon Bubba and I went to the grocery store to replenish what I thought was our unending stockpile of frozen waffles and American cheese. We picked her up after class and went home, and I brought the kids inside first, with a couple of things, then went back downstairs and out to the car to get the rest of the bags. I come back and start putting everything away and as I am doing this, I think to myself "I had more tomatoes, right?" but then kept going.

So I'm putting everything in the freezer, thinking I am very together because I had cleaned all of the old hair and dried jelly out of the fridge this morning, when Bubba comes stumbling into the kitchen, covered in red goo.

WERE YOU STABBED?! DID YOU THROW UP?! BABY, COME TO MOMMY!!

He comes closer and I see that he is covered head to toe in used cherry tomato. With a sinking feeling, I walk past him into the playroom...

Baby Boy stole a carton of tomatoes out of a grocery bag, dumped it out on the rug, and proceeded to stomp on or squish every single tomato into the couch. And of course, he is standing there with a sh!t-eating grin on his face, loving every second.

The blood is pounding in my ears. I adopt my best Norman Bates voice (the one I take on when I am really, really about to lose it) and send him to timeout. Instead, he goes into the shoe closet, sits on the floor and dramatically fake snores while posing at himself in the mirror.

Note: tomatoes are sticky and disgusting but come out of carpet and couch fairly easily.

Obviously, I am all done for today.
Posted by Kati at 5:50 PM 0 comments

Seriously, we may have to move. I feel like I've said this before, but this time I mean it.

We have a snake. In the yard. That slithers. Through. The GRASS.

Unacceptable. And terrifying. Let me explain how bad this is...

Okay, so Bink and Bubba and I are playing in the yard. I am generally a barefoot girl and Bink is, too so we never wear shoes when we go outside (I know, that is how parasites attack your feet and get into your bloodstream and ultimately cause your demise BUT I have heard that parasites are an awesome weight loss technique so I'm willing to risk it)...

And we are running around, being princesses (obviously, what else would we be doing? Our taxes?) and I happen to glance down...

AND THERE IS A GIANT BLACK SNAKE SLITHERING THROUGH THE GRASS TWO INCHES FROM BINK'S FEET! AND MORE IMPORTANTLY, MINE!!

I tell her to run for her life! She tells me I am a goosehead! I pull her out of harms way, run her up the stairs and dramatically into the house. She doesn't thank me for this, rather, she tells me that she wants to stay outside because the snake is nice, and there is nothing to be scared of.

Nothing to be scared of??? This is a legit picture of a random snake I found that is not one third as scary as the snake in our yard:

(Okay, I found MANY pictures of snakes that were really, really scary and scared me too much to post. So here's one that isn't so bad) 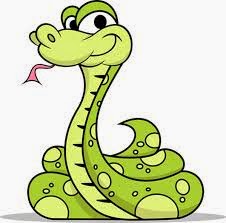 If only our snake was this sassy.

Today we went to the playground with a bunch of Bink's little friends. It's the nicest day of the year and while Bink does not overly love the playground, I thought she would love to see her friends outside of preschool, run around a bit, and enjoy herself.

Well, she did not. She spent the entire time clinging to my leg, whining, eating goldfish and interrupting the other mothers. I reprimanded her about 599 times, and she shook her finger at me but kept her mouth shut.

Until the final time, when she hit me in the face.

It was not a real hit, it is the kind of hit that Bink (and probably other kids) do that is very light, so it doesn't actually hurt, and she can pretend it isn't a hit, but she still means it as a hit, so it counts.

So I picked her up and took her home immediately. Of course at this point she was having a full-on meltdown, but I brought her to the car anyway and we came home. She was screaming, crying, shaking her finger, the whole thing. I asked her why she thought we left, and she said that she didn't know, of course, but then we talked about what she did and she apologized and howled some more.

And then my anger dissipated, and I started to feel BADLY.

Like, so badly I have a heavy feeling in my chest. I made her cry. I took her away from her friends. And I know she cares not at all now, an hour later, but I feel like junk. And if someone told me this, I would tell that person that of course they should not feel badly, that kids have to learn and sometimes you have to do things that suck to get your point across.

But I still feel guilty.

What would you have done? What have you done in situations like this? I don't know if there is a middle ground, where we could have stayed and she would have understood the ramifications of what  she did. Is there? She's a really good girl so I don't want to make a mountain out of a molehill, but hitting is a mountain, isn't it?

Tell me what you would do and stop me from eating bagged shredded cheese while sobbing in the fetal position on the bathroom floor.
Posted by Kati at 1:16 PM 5 comments

I have literally said all of these things in the last 24 hours.

We do not show our bums in Target.

We have been in Target 20 minutes. I am not making a third trip to the bathroom. We are going home.

I don't care what I said, you cannot call your doll LaFawnduh Throwup Fabulous.

You may call it a magina.

It's probably not poop, but wash your hands, just in case.

I know, it drives me nuts when bears break into our house at night and eat our hair, too. But we're not moving to the backyard.

I love you a million billion, too!

And most touching of all:

The small beer, please. I have to get back to preschool.

You are all welcome. Well, if you have junky sleeping babies. This is literally a life-changer.

Um, why isn't this woman running the country? The universe? I'm serious. She is literally solving Baby Boy's sleep issues without incident and it makes TOTAL sense. Here is what I took away from it:

So Bubba is 7 months old and goes down to sleep very easily, but then wakes up and SCREAMS bloody murder for hours. I have been putting him down on the bottle, with a pacifier, so he falls asleep on me, with something in his mouth, and then wakes up in a different spot, with nothing in his mouth, and freaks out. Well, yeah, that makes sense. It would probably freak me out, too. But did I think of that? No. Her brilliancy did, so I switched it up: bottle, bath, book and bed. And I gave him a lovey, which I never did because Bink never really attached to anything. I put him down awake at 7:30. He cried for exactly 35 seconds, and made not a peep until 5:15.

And she recommends the mom carrying around the lovey for a while so it smells like you. Well, I didn't feel like doing that so in the afternoon I went into his room and sprayed my perfume on his sheet and his toy. I wear Dior Addict. It's not exactly a "baby" scent. So when he's 16 years old and wondering why he's innately drawn to the musky florals and heady Orientals that emanate from the old women working in the library, I will say not a word. And you'd better not, either.

Of course that whole situation is bunk, because he's obviously taking ME to the prom, as nobody will ever, ever love him as much as I do. And then when we share a dorm room at his college of choice, I'll spray his room down every night with my old lady perfume and we'll read "The Teddy Bears Picnic"...

I know, but I can't help it. So that excuses it. Sucka!